Our Essential Sri Lanka special offer is a two-week tour of Sri Lanka which takes you to the Cultural Triangle, home to the island’s most awe-inspiring historic monuments; the vibrant city of Kandy; Hatton’s scenic tea hills, and Yala National Park, before ending with four nights on the spectacular beaches of the south coast where whale watching and a variety of water-sports are on offer. With savings of up to 30%, this is a special offer Sri Lanka tour not to be missed, particularly for first-time visitors to the island.

Upon arrival at the airport, head to nearby Negombo where you can take time to rest and recover from your jetlag. Travel north to the Cultural Triangle. Spend the next two days exploring the many historic sites in this region, from the awe-inspiring Sigiriya Rock to the 2,000-year-old cave paintings and Buddha statues of Dambulla Cave Temple. You can even meet the monkeys that are the modern-day rulers of Polonnaruwa, Sri Lanka’s medieval citadel – a favourite activity with children. Head down to Kandy, Sri Lanka’s last royal capital and now a bustling, vibrant city. Kandy is a cultural melting pot: relics of British colonial rule are scattered across the city, including the British Garrison Cemetery and beautiful Royal Botanical Gardens, sitting side by side with mosques and Buddhist temples, the most famous being the iconic Temple of the Tooth. Kandy’s clamouring bazaars are also fascinating to visit, especially for foodies, and the region is famous for its traditional arts and crafts such as Kandyan dancing. Journey into the island’s central hill country, either by car, or by rail should you wish to follow in the footsteps of the British planters – this train journey has been described by Lonely Planet as one of the most beautiful in the world. Over the next two days, enjoy the cooler climes of the hills, either soaking in the views by the pool or exploring the surrounding tea estates on foot.

Recommended Activities: Kandy to the Hill Country by train Wind out of the hills and down to Yala National Park, one of Sri Lanka’s largest and most beautiful parks which is one of the best places in the world to see leopards. You have time for four jeep drives in the park during your stay, and as well as leopards you can spot many different animals including elephants, sloth bears, crocodiles and a wide variety of birds. End your holiday with four nights on Sri Lanka’s south coast. Idyllic tropical beaches await, with whale watching excursions and a variety of water-sports to delight those who want to be active. Historic Galle Fort is just a short drive away, and the adventurous may wish to go cycling through the scenic inland countryside or take a traditional cooking class – as always, the choice is yours. Today, your chauffeur-guide will pick you up and take you to the airport in time to catch your flight home. 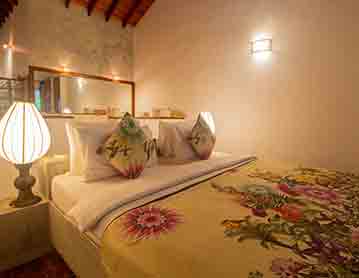 Villa Hundira is a 12-bedroom boutique hotel nestled in tropical gardens overlooking the picturesque Negombo Lagoon. Situated in the village of Thalahena, it lies just 20 minutes away from Colombo’s international airport, making it a good spot to recuperate after a long flight. 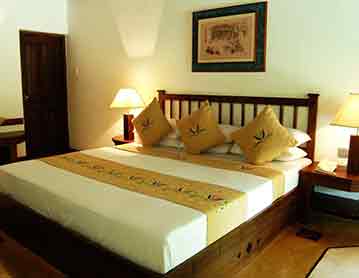 Amaya Lake is a simple hotel of four-star standard which enjoys a peaceful and beautiful setting by the banks of Kandalama Lake in Sri Lanka’s Cultural Triangle. An excellent eco-hotel with a personal feel that offers low-level cabanas in tranquil woodland.

The Yala Adventure is the latest addition to the camping outfits which surround Yala National Park. Located overlooking the Yoda Wewa, the property offers its guests the choice of tents, standard and deluxe rooms, as well as a host of activities including game drives to Yala, Udawalawa, Lunugamwehera and Bundala national parks. Dambulla Cave Temple is one of the most popular religious cultural sites in Sri Lanka, attracting tourists from across the globe. A sacred pilgrimage site for 22 centuries, it is the largest, best-preserved cave-temple complex in Sri Lanka. This World Heritage site has the largest number of Buddha statues all housed in one place, including a colossal, 14-metre-long figure of the recumbent Buddha carved out of the rock. Sigiriya is one of the most dramatic and inspiring historical locations in the world, a huge rock fortress rising impossibly from Sri Lanka’s central plains, and possessed of a glorious history that has caused millions of travellers to gape in wonder. The Monkey Kingdom of Polonnaruwa

Quite apart from the incredible ruins of this medieval city, Polonnaruwa is home to a large monkey population who were famously featured in Disney’s engaging documentary film ‘Monkey Kingdom’. Polonnaruwa is a gloriously majestic backdrop for this experience, which allows you to closely observe the three diurnal primates of Sri Lanka: grey langur, purple-faced leaf monkey and toque macaque. Although these creatures can be seen in various parts of the island, this is one of the best places for travellers to get up close and personal with the monkeys of Sri Lanka. The Peradeniya Royal Botanical Gardens, located just outside of Kandy, are Sri Lanka’s largest landscaped gardens, spanning over 60 hectares, and can lay claim to being the finest in Asia. They will delight anybody who loves to see nature showcased at its best. Temple of the Tooth

Discover one of the great legends of Sri Lanka by visiting the Temple of the Tooth in Kandy where a sacred tooth relic of the Buddha is housed in great splendour. The story of this religious relic rivals any in the world. The Buddha’s tooth was brought to Sri Lanka in 4th Century A.D. and was subsequently passed round with great ceremony by a succession of Sinhalese kings and monks who regarded it as a symbol of sovereignty. Watch a Kandyan cultural show and be awed by the spectacular dance, acrobatics, costumes and music. Held in Kandy town, this cultural show depicts various forms of Kandyan dancing which was once native to the area but has now spread to different regions of the island. Originated from a dance performed by Indian shamans who came to the island, Kandyan dancing plays an important role in Sri Lankan culture and is a much-anticipated event during perahera processions. During the show, you will see several dances which depict the graceful movements of birds and animals, which trace their origins back to the ancient ritual known as the Kohomba Kapkariya, as well as energetic acrobatic performances where the men perform a series of leaping pirouettes and stunts such as plate-spinning and the dramatic ‘fire walk’ which ends the show. Kandy to the Hill Country by train

Take the train from Kandy into Sri Lanka’s dramatic hills and experience one of the most beautiful and invigorating rail journeys in the world. Yala National Park is one of the largest and certainly the most popular national park in Sri Lanka, and has the highest density of leopards anywhere in the world. Hidden away in the far south-east of the country, it comprises five separate blocks covering 141sqkm. Galle Fort is a UNESCO World Heritage Site, originally built by the Portuguese in the 16th century and then further developed by the Dutch and the British over the next 350 years. It covers nearly 4sqkm and is protected by 12 bastions and connecting ramparts. During the early 18th century, the Old Dutch Gate was the entrance to the Fort, but subsequently the British built the Main Gate that is still used today. Buildings of interest include the Dutch Reformed Church, All Saints Church, Amangalla Hotel (formerly the New Oriental Hotel),the lighthouse and bell tower. The Dutch also developed what was then an innovative tide-based sewage-system within the Fort. Learn how to make rice and curry, Sri Lanka’s delicious and underrated traditional cuisine, which is overshadowed on the international culinary stage by the food of its neighbours, such as India. Although it sounds simple, rice and curry is actually a complex dish comprised of seven different elements, including curries, spiced vegetables in a variety of textures, sambols, chutneys and rice. Galle’s rural inland landscape is largely unfrequented by tourists who visit this region, as they are often more preoccupied with visiting the UNESCO World Heritage Site of Galle Fort, or relaxing on the popular beaches along the Galle Coast. However, the countryside around Galle is truly picturesque and is particularly nice to explore if you are looking to discover the ‘authentic’ Sri Lanka which is sometimes hidden on the tourist trail – cycle past lush green paddy fields dotted with water buffalo, bright white egrets and vibrant kingfishers, sloping tea plantations, rice fields, small villages, temples and colourful gardens growing spices and fruit. Go whale watching in Sri Lanka, acclaimed as one of the best places in the world to see whales. Spot dolphins, sperm whales and blue whales near Mirissa. The island’s shoreline lies unusually close to the continental shelf, the point when the ocean floor drops dramatically and where larger marine life is found, and so it does not take too long to reach these deep waters from Sri Lanka’s western, southern and eastern coastlines. Whale and dolphin watching is possible from Kalpitiya, Bentota and Mirissa between December and April, and from Trincomalee and Pasikudah on the east coast between June and August, but Mirissa is widely thought of as the best place for whale watching in Sri Lanka.